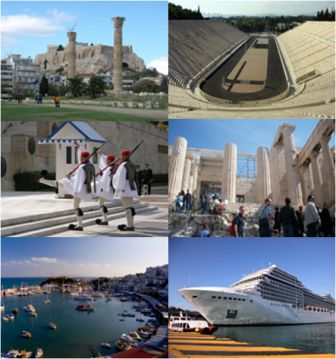 For the following trip we have a package offer for you with your reception from Athens Airport or Piraeus Port.
You can see the price list and if you are interested, select "Trips from Airport/Piraeus" from the booking form at Special Offers in Pick up Categories.

Trip to Athens in luxurious air-conditioned cars of AthensTransports. The trip will start from the Hadrian's Arch (built in 132 AD) and the Temple of Olympian Zeus which although its construction began in the 6th century BC, it was completed by the Roman emperor Hadrian in the 2nd century AD. It was the largest temple in Greece during the Hellenistic and Roman times.

Then we visit the Panathenaic Stadium, where the first modern Olympic Games took place in 1896. Then the National Palace, the National Garden, the Parliament Building where we see the changing of the guard dressed in traditional costumes. The old building of the University of Athens in the University Avenue is one of the most elegant buildings in Athens, which along with the building of the National Library and the Academy of Athens are known as the "Athens Trilogy". They were all built in the late 19th century.

Next, we head to the Acropolis rock with the magnificent Parthenon temple and the new Acropolis museum a place that everybody must visit. Just below the Acropolis is the ancient theater of Herod Atticus, which operates during the summer.

The trip will end with a tour of the port of Piraeus and Mikrolimano known for its famous fish taverns near the sea.